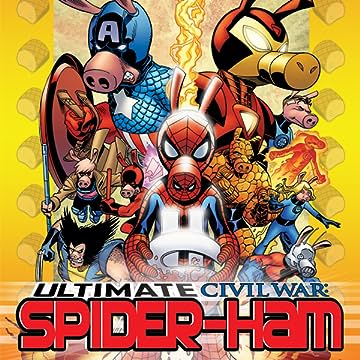 You asked for it, you got it! Quite possibly the most important comic ever! A life-changing event that will change the way you look at yourself and the world around you! Spinning out of the pages of CIVIL WAR - and every other top-selling comic crossover event you can think of – it's ULTIMATE CIVIL WAR SPIDER-HAM (FEATURING WOLVER-HAM)! He's little, he's pink, he knows how to bring home the bacon. He's Spider-Ham - and he's about to embark a kaleidoscopic, time-spanning, universe-shifting journey that will prove just how big a pig he really is. Guest-starring: Iron Ham, Deviled Ham, Fantastic Ham, Green Ham, Ant-Ham, Ultimate Captain Ham, Hambit, Hamneto, and everyone's favorite Sorcerer Supreme -whathisface? You know, the guy with the blue tights and red cape...Mustache...Man-servant named Wong? Anyway, you know who I'm talking about. He's in it, too. And Wolver-Ham - did I mention him?