Official Tarot of the Marvel Universe (2007) 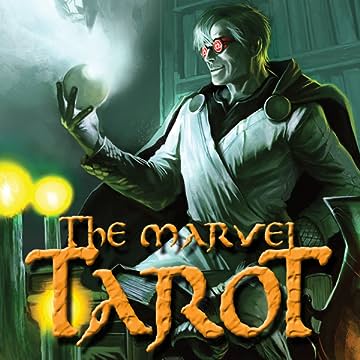 Official Tarot of the Marvel Universe (2007)

Theories on the Marvels of Myth and Magic from the files of Ian McNee! Sorcerer and outsider Ian McNee has been plagued by disturbing dreams and unsettling omens. Something is not right with the world and he needs to know what it is. To gain insights into his growing unease he turns to his most prized mystical possession, The First Tarot! Created in the distant past, The First Tarot is mystically attuned to reflect and track the archetypes of the Marvel Universe. Can this 'Tarot of Marvels' show Ian what is wrong? Or is something wrong with it as well? Peek inside the fascinating and disorganized files of a Magician on a Mission as he examines the current concepts behind Marvel's Myth and Magic and adds a few of his own. How do the Elder Gods connect to the Four Elements? Who are The Get of Set? And a who's who of Marvel characters presented in the context of the Tarot's Major Arcana. Is Dr. Doom The Emperor? Is Daimon Hellstorm The Devil? All will be revealed...in the cards!