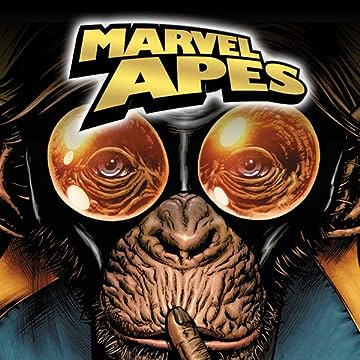 Collects Marvel Apes Specials: Amazing Spider-Monkey, Grunt Line, Prime Eight And Speedball. Feces front, True Believers, as we travel back to the Monkey-verse with four thrilling tales of bad puns and big guns. First, join the irrepressible Spider-Monkey as he comes to grips with a world too savage for his heroic legacy to allow. But as the Monkey-verse Peter Parker tries to create a better world for all ape-kind, Captain America (the top ape of the ape-verse) -stands in his way. Will the webbed wonder survive? Then, when teenager Roy Reyna finds he can transform into the super-powered simian APE X, it's more fun than a barrel of monkeys...until H.A.M.M.E.R. agents capture him! Plus: in the face of a fate worse than death, the Ape Universe's greatest minds and leaders must come together to save their world in a secret council known as - the PRIME EIGHT! Watch the undercover action unfold in this never before seen story that could only be called APE-OKOPLIS NOW! And then, it's the masked (monkey) marvel SPEEDBALL! Bouncing out of the pages of the hit MARVEL APES mini-series- it's the masked (monkey) marvel SPEEDBALL! Branded a traitor to the entire Ape Universe, the simian superhero is now exiled, alienated, and alone on a bizarre Planet of Humans! Can this monkey make it in Man's World? It won't be easy.