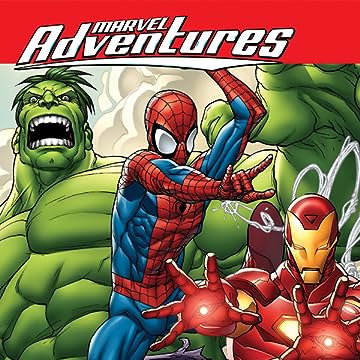 Collects Marvel Adventures Super Heroes (2010) #7 and #11 and Marvel Adventures The Avengers (2006) #5 and #15. It's all-ages action in the Mighty Marvel Manner as the God of Thunder drops the hammer in four titanic tales! See how Thor came to our world, and what awesome adversities shaped him into a champion of man! Thunder gods! Lying gods! Father gods! Giant nasty monster dudes bigger than skyscrapers! Get ready for another epic tale featuring the God of Thunder! With great power comes...a whole lotta trouble? That's what the Wrecker finds out when he's zapped by a jolt of magical muscle meant for Loki, the god of mischief. Suddenly, the Joe Lunchpail of crime is taking on Earth Mightiest Heroes, and all of them are running afoul of one very angry Norse god! Sound your horn, Heimdall! Villains march across Bifrost Bridge, to challenge the forces of Odin! But wait...who are these mortals that count themselves as friends of Thor? Avengers? Then bid them to unleash their vengeance lest we face Ragnarok!
1 TO 18 OF 21