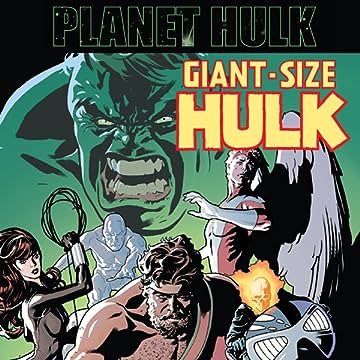 What is the untold story of the battle between one of the strangest superhero teams in the Marvel Universe and the engine of destruction known as the Incredible Hulk? See ol' Purple Pants go toe-to-toe with Angel, Ice-Man, Ghost Rider, The Black Widow and Hercules in a story that holds a key to Post-PLANET HULK events! PLUS! A PLANET HULK INTERLUDE! Bruce Banner makes his first appearance on Planet Sakaar — and battles the Hulk for his body and soul! What secret is the Hulk hiding? What terrible truth does Banner reveal? And who will triumph in this ultimate showdown?