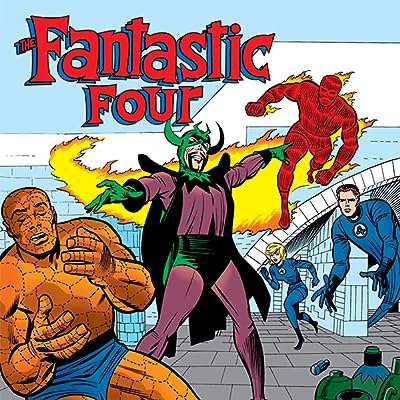 Prepare yourself for another dose of the World's Greatest Comic Magazine, courtesy of the world's greatest comic collaborative team! Lee and Kirby set the standard for out-of-this-world imaginative adventure and launched the Marvel Universe with the Fantastic Four. Now, with all the Marvel U.'s super hero players in place, it's time for the FF to run the gauntlet. The Thing throws down with the Hulk in a battle so huge it takes the combined might of the FF and the Avengers to stop it; the Sub-Mariner makes a play for Sue Storm; the FF tangle with the X-Men; Nick Fury drops by in the story that set the table for "Agent of S.H.I.E.L.D."; and even Dr. Strange makes an ever so astral appearance! Oh, and there's villains, too! The Mole Man makes his first return since FF #1; Dr. Doom threatens the FF once more, and if he's not evil enough for you, just wait 'til you see the surprise identity of the Hate-Monger! Just for fun, you'll also get the Mad Thinker and his Awesome Android, the Puppet Master, the Red Ghost, the outer space Infant Terrible, and the villain fans love to hate - Diablo! Collecting THE FANTASTIC FOUR #21-30.